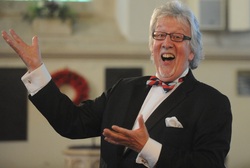 Grenville Jones is a choir leader and musician who lives in Bath. He has three sons, Daniel, Kieron and Laurie, and three grand children. Aged 60, his driving passion is to get people of all ages singing and BELONGING to a group where they can make friends, enjoy themselves and have fun through music.

He founded the Golden-Oldies registered charity in 2007 taking four fun singing sessions himself for the elderly in community rooms in and around Bath. Goldies ( as it has become known ) now has Sir Cliff Richard as supportive patron and its open-access session are attended by hundreds across the West of England and South Wales each week.

There are now 23 session leaders – see www.golden-oldies.org.uk for more info.

Grenville’s ambition is to see Goldies UK as UK-wide charity, bringing joy to thousands of people, including the elderly as well as people with Alzheimer’s and learning difficulties.

“The power of music knows NO boundaries.” 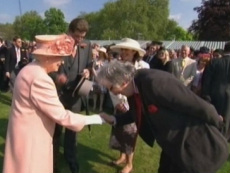 In June he attended a Buckingham Palace garden party as guest of the Big Lottery** and was presented to the Queen. In August he received an honorary Doctor of Letters from Bath Spa University recognising his contribution to music and his leadership of the Goldies Charity. 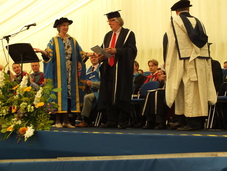 He works with the BBC at Bristol. Last November the  BBC Children in Need evening featured  Gareth Malone and youth choirs from across the UK. Grenville trained the choir that represented BBC West region. In July of this year he led the BBC Wiltshire 200 voice Decibel Choir who sang at Salisbury Olympic Flame celebration.

2012 is a continuation of the roller-coaster ride for Grenville ! This year he has taken popular workshops including one with his friend Mark de Lisser on the Isle of Wight, and conducted his numerous choirs at concerts around the UK. As Goldies founder he led the **Jubilee Time after Time Lottery funded project. This is a finalist in the National Lottery Awards 2012 Educational Category.

In June he collaborated with Bath Abbey to stage a sell-out Jubilee Concert which raised £6,000 for local small charities. In July he announced his personal super dream to raise £20,000 to take a group of children with severe learning issues to Paris and Disneyworld - see www.super-dream.org.uk

In the past few months alone his various choirs have helped to raise over £25,000 for local and national charities. Grenville is pictured with Camilla, Duchess of Cornwall at a fundraising concert in Bath Abbey for the National Osteoporosis Society.

He has also been interviewed on radio and TV many times  and  through his leadership of the Last Choir Standing Bath Male Choir he also has been seen across the World.

Because of his reputation in the UK, he was invited to be the only UK member of a prestigious EU Consortium which is studying how modern technology can bring music and exercise into the lives of the elderly and isolated across Europe.
Commissions for singers have come from Disney/ DreamWorks as well as a number of charities who look to Grenville for guidance when planning choral events. If you want to find a choir, you contact him! Grenville provides groups for weddings, films and other events.. There are over 500 people in his singing groups. He was once interviewed by Aled Jones on his Radio Three programme "The Choir" talking about his reputation to get people of all ages singing. 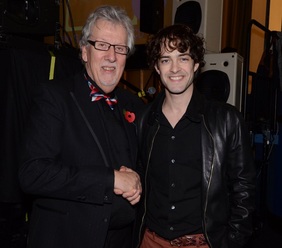 Grenville ran his second Bath Half Marathon on Sunday March 6th 2011 (2 hrs 47mins) knocking 15 mins of his 2010 time! He was raising money for his Golden-Oldies Charity with another 30 members of the Nutricia sponsored team. He did not run in 2012 but is in training for 2013 when he will be raising money for his Super-Dream.

Grenville's background includes a number of years managing newspapers as well as a period working as a freelance for the BBC in Bristol. He built up his own successful PR and Marketing company in the 80s and 90s and also a magazine company publishing golf titles - Grenville still likes to dust off his clubs and occasionally enjoy a round with his 3 sons.

Singing was always part of a Methodist home upbringing in Purton near Swindon. He used to have a tenor voice but says that many years of choir conducting have strained his voice now to be a  croaky poor bass.

Grenville was a Mayor of Bath - Citizen of the Year 2009. The year that Bath Male Choir featured on the BBC Last Choir Standing series. He was nominated by a number of folk who attend the Golden-Oldies sessions in the City. The Bath Chronicle in its first issue of 2009 also named Grenville as runner up to the Bath Man of the Year for 2008, an award he won last year. He was also one of 10 people nationwide nominated for the ITV / Daily Mirror Community Champion award in 2009.

If you would like to see what Grenville looked like when he was a member of the close harmony group Five in Bar then click here.